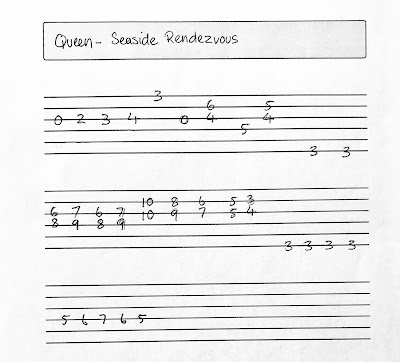 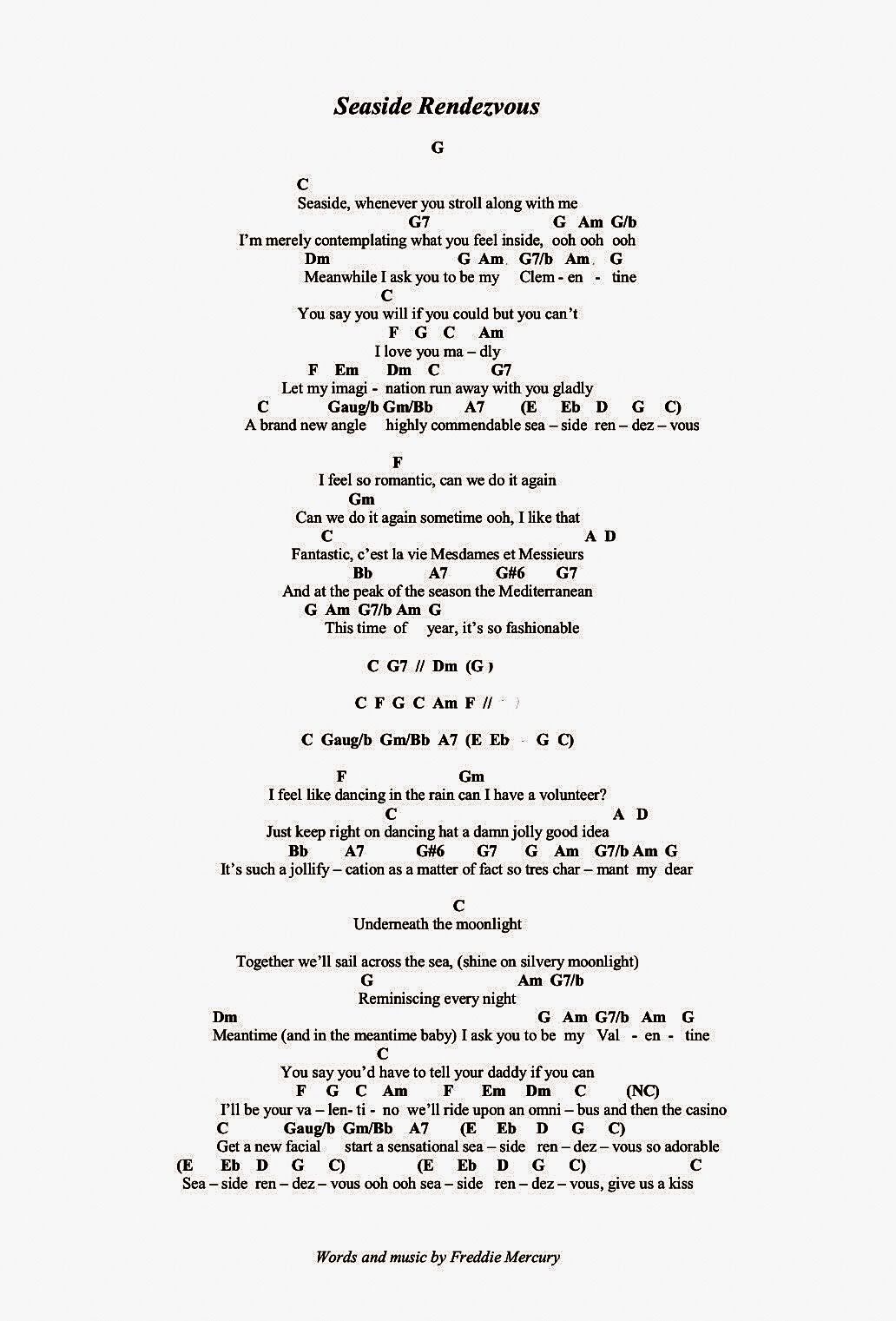 Posted by Unknown at 9:01 AM No comments:

"Under Pressure" is a 1981 song by the British rock band Queen and the British singer David Bowie. It was included on Queen's 1982 album Hot Space. The song reached number one on the UK Singles Chart, becoming Queen's second number-one hit in their home country (after 1975's "Bohemian Rhapsody", which topped the chart for nine weeks) and Bowie's third (after 1980's "Ashes to Ashes" and the 1975 reissue of "Space Oddity"). The song only peaked at No. 29 on the US Billboard Hot 100 in January 1982, and would re-chart for one week at No. 45 in the US following Bowie's death in January 2016. It was also number 31 on VH1's 100 Greatest Songs of the '80s. It has been voted the second best collaboration of all time in a poll by the Rolling Stone magazine.

The song was played live at every Queen concert from 1981 until the end of Queen's touring career in 1986. It is recorded on the live albums Queen Rock Montreal and Live at Wembley '86. The song was included on some editions of Queen's first Greatest Hits compilations, such as the original 1981 Elektra release in the US. It is included on the band's compilation albums Greatest Hits II, Classic Queen, and Absolute Greatest as well as Bowie compilations such as Best of Bowie (2002), The Platinum Collection (2005), Nothing Has Changed (2014) and Legacy (2016).

It was certified 2x Platinum in the US by the RIAA , for over two million digital download equivalent units, on 20 March 2018.

Queen had been working on a song called "Feel Like", but was not satisfied with the result. David Bowie had originally come to Mountain Studios to sing back up vocals on another Queen song, "Cool Cat", but his vocals were removed from the final song because he was not satisfied with his performance. Once he got there, they worked together for a while and wrote the song. The final version, which became "Under Pressure", evolved from a jam session that Bowie had with the band at Queen's studio in Montreux, Switzerland. It was credited as being co-written by the five musicians. The scat singing that dominates much of the song is evidence of the jam-beginnings as improvisation. However, according to Queen bassist John Deacon (as quoted in a French magazine in 1984),[14] the song's primary musical songwriter was Freddie Mercury – though all contributed to the arrangement. Brian May recalled to Mojo magazine, in October 2008, that, "It was hard, because you had four very precocious boys and David, who was precocious enough for all of us. David took over the song lyrically. Looking back, it's a great song but it should have been mixed differently. Freddie and David had a fierce battle over that. It's a significant song because of David and its lyrical content." The earlier, embryonic version of the song without Bowie, "Feel Like", is widely available in bootleg form, and was written by Queen drummer Roger Taylor.

There has also been some confusion about who had created the song's bassline. John Deacon said (in Japanese magazine Music life in 1982) that David Bowie created it. In more recent interviews, Brian May and Roger Taylor credited the bass riff to Deacon. Bowie, on his website, said that the bassline was already written before he became involved. Roger Taylor, in an interview for the BBC documentary Queen: the Days of Our Lives, stated that Deacon did indeed create the bassline, stating that all through the sessions in the studio he had been playing the riff over and over. He also claims that when the band returned from dinner, Deacon, amusingly, forgot the riff, but fortunately Taylor was still able to remember it. Brian May clarified matters in a 2016 Mirror Onlinearticle, writing that it was actually Bowie, not Taylor, who had inadvertently changed the riff. The riff began as "Deacy began playing, 6 notes the same, then one note a fourth down". After the dinner break, Bowie corrected (actually changed) Deacon's memory of the riff to "Ding-Ding-Ding Diddle Ing-Ding".

Posted by Unknown at 8:43 AM No comments:

Above James Rundle plays Queen We Will Rock You Fast Version From Queen On Air.
Below Guitar tab notes used in video 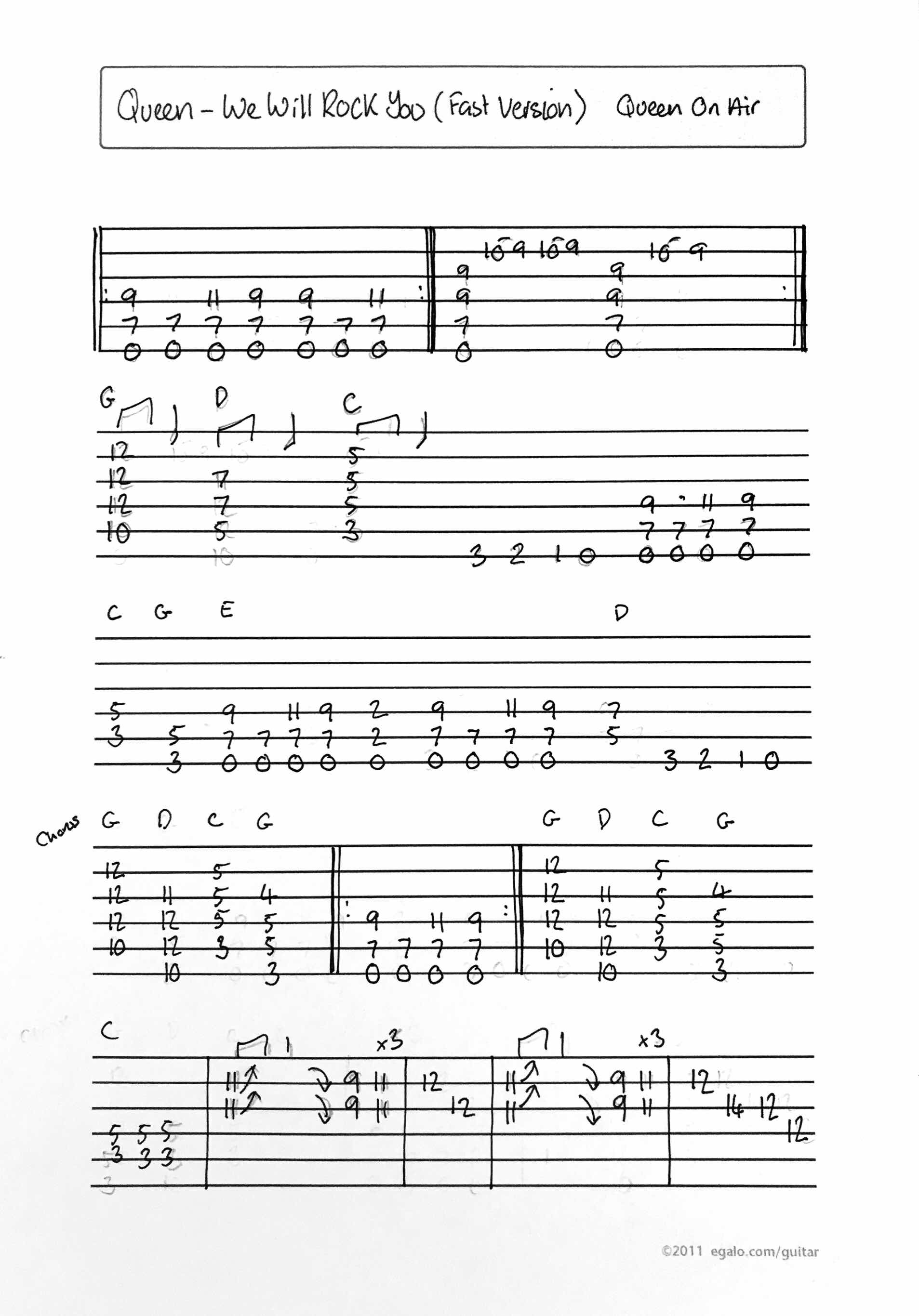 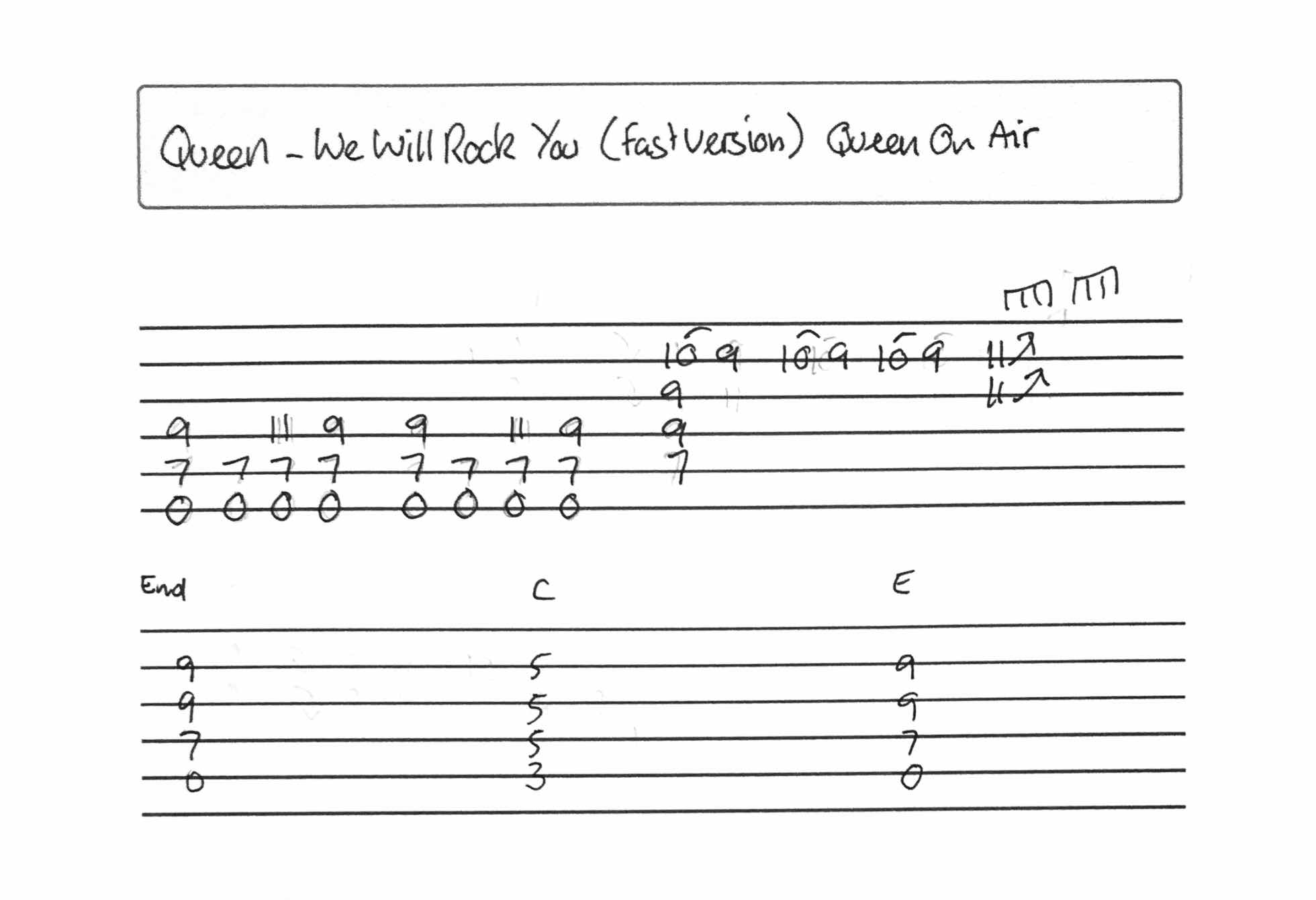 Posted by Unknown at 8:22 AM No comments:

Email ThisBlogThis!Share to TwitterShare to FacebookShare to Pinterest
Labels: guitar tab, queen, queen On Air, we will rock you

The Different Guitars Of Brian May

The Different Guitars Of Brian May
Article https://www.musicradar.com/news/guita...
The Red Special Made for Bohemian Rhapsody Movie http://www.theredspecial.com/2018/06/... 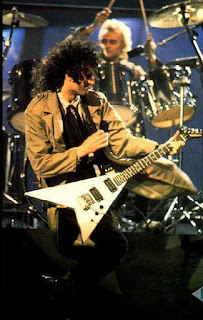 Queen guitarist Brian May is most famous for using his home made now iconic guitar the Red Special.
Over the years though he's used an assortment of different guitars.
In the early years we saw him use Gibson Les Paul and Fender Stratocaster. 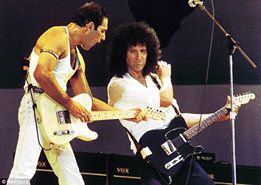 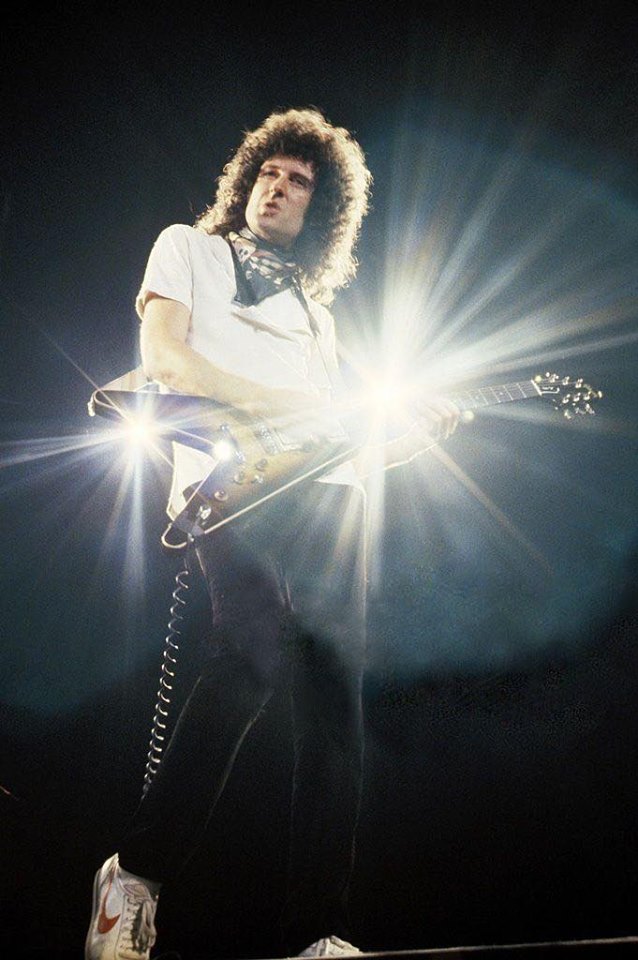 Posted by Unknown at 8:23 AM No comments:

Email ThisBlogThis!Share to TwitterShare to FacebookShare to Pinterest
Labels: brian may, burns guitars, guild guitars, guitar, The Different Guitars Of Brian May 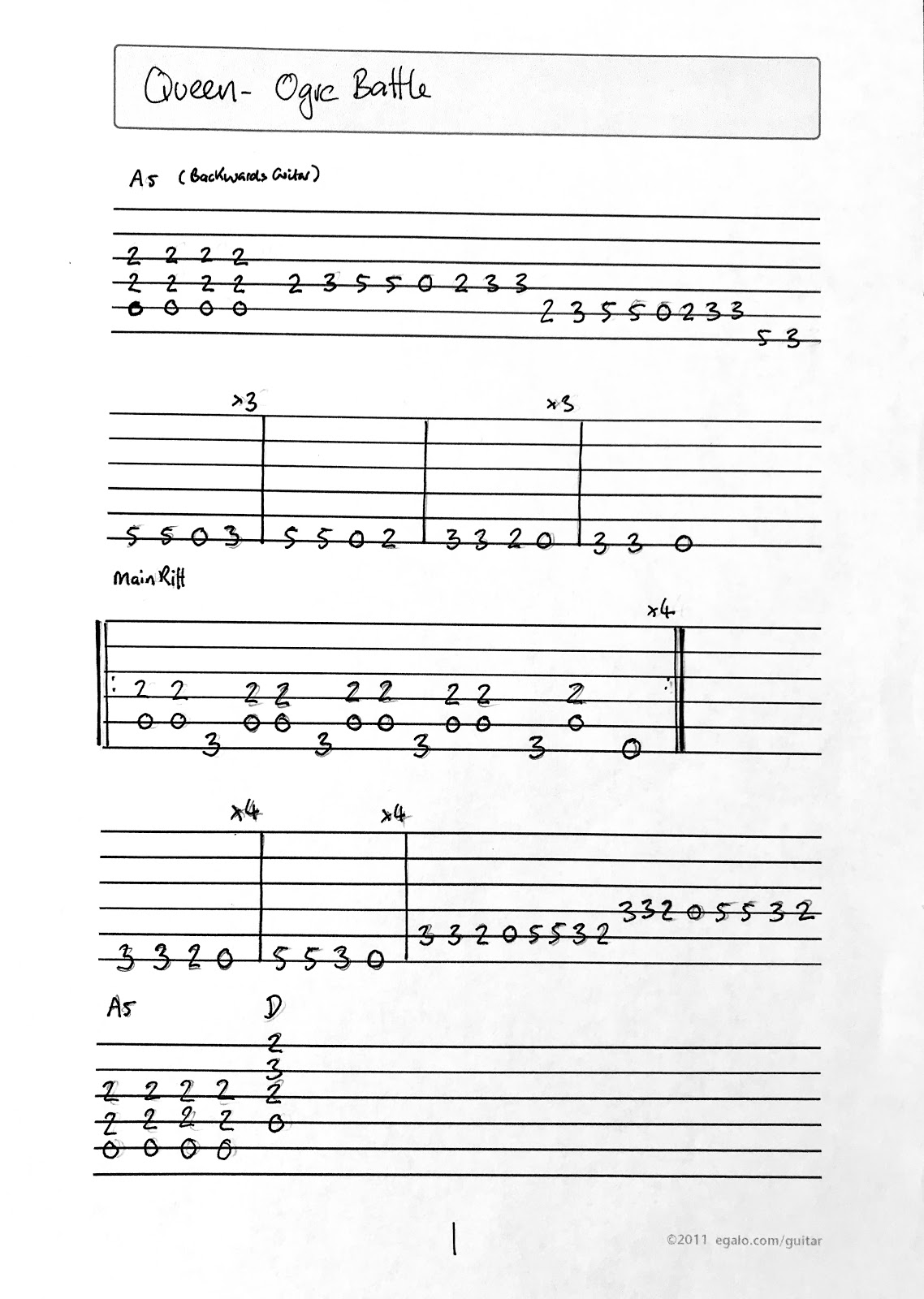 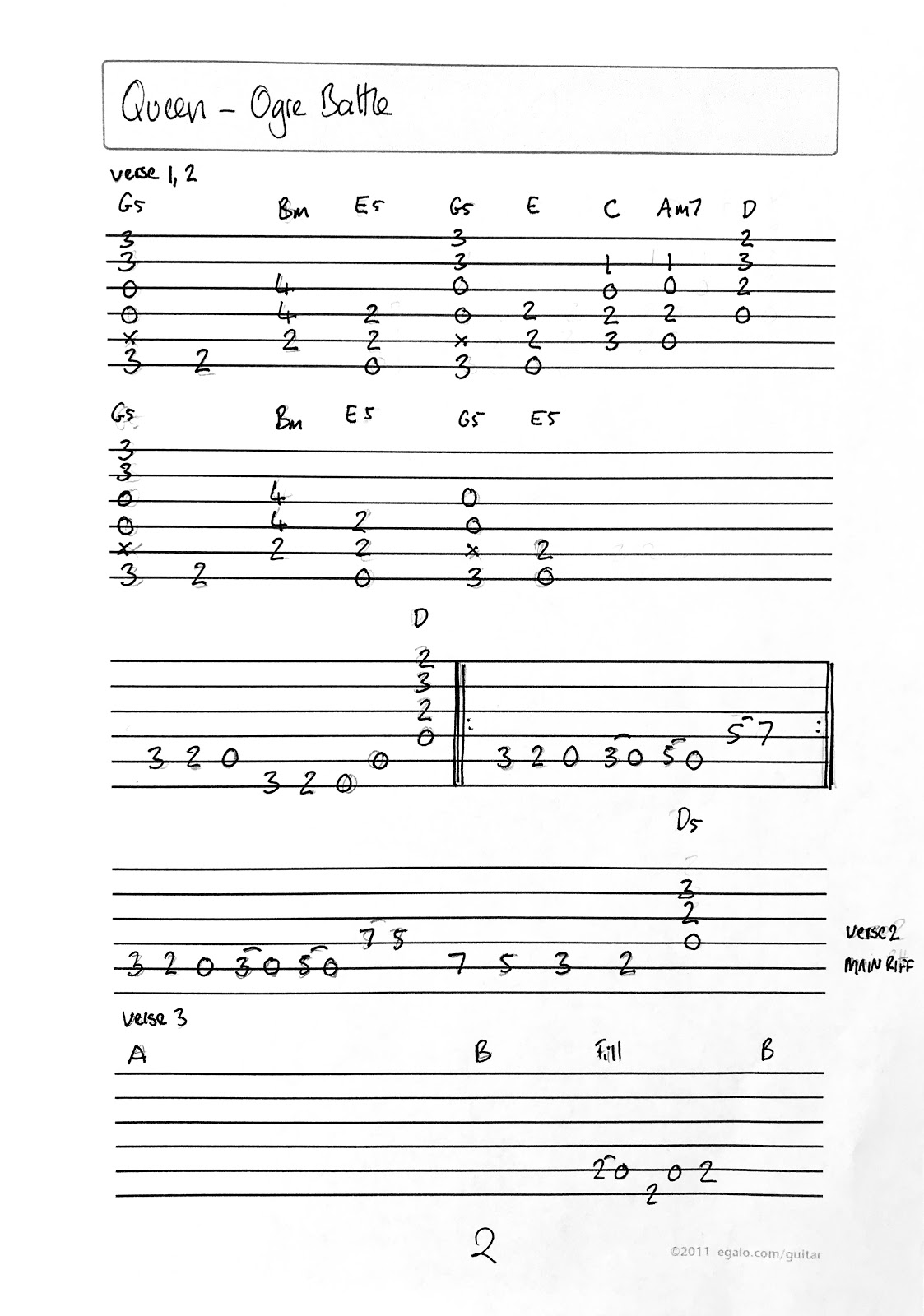 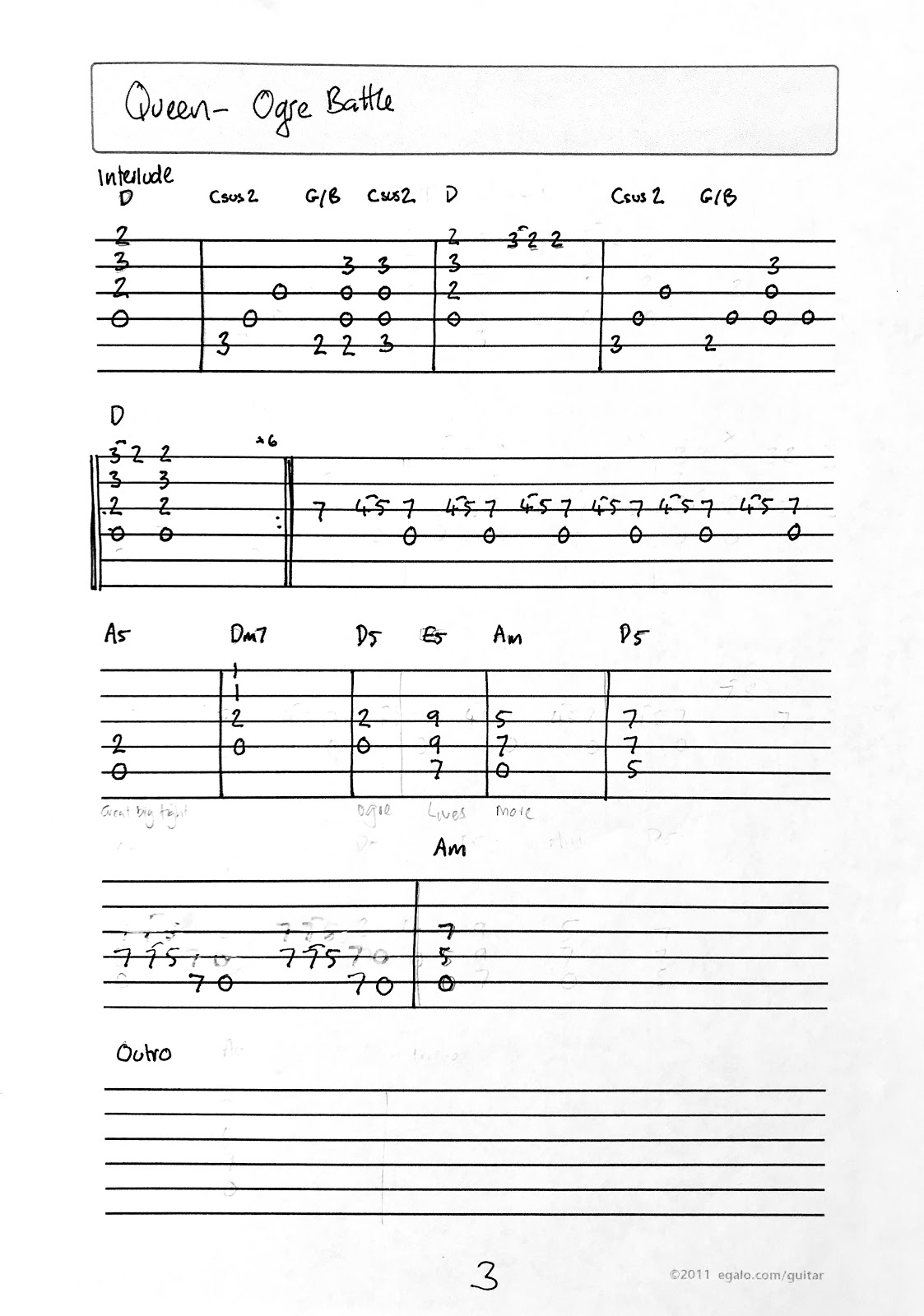 Posted by Unknown at 1:30 PM No comments:

In 1982 Queen released Las Palabras De Amor From The Hot Space Album with a recorded Top Of The Pops Performance.

The song written by Brian May was not on the Queen Greatest Hits II album but was later included on Greatest Hits III.
It peaked at number 17 in the U.K. charts as well as reaching number 1 in Poland.

4:29
Label EMI
Songwriter(s) Brian May
Producer(s) Queen and Reinhold Mack
Queen singles chronology
"Body Language"
(1982) "Las Palabras de Amor (The Words of Love)"
(1982) "Calling All Girls"
(1982)
"Las Palabras de Amor (The Words of Love)" is a rock ballad by the British rock band Queen. It was released as the third single from their 1982 album Hot Space. It is sung mostly in English, but with several Spanish phrases. Written by guitarist Brian May, the song proved more popular in the United Kingdom than their previous single ("Body Language"), reaching #17 in the UK Singles Chart

The song's lyrics were written by guitarist Brian May. Vocals were provided by lead singer Freddie Mercury with May on the high harmony vocal. The song was inspired by the band's close relationship with their Latin American fans. It marked the band's final studio appearance on Top of the Pops (having previously appeared to promote "Seven Seas of Rhye", "Killer Queen", "Now I'm Here" and "Good Old-Fashioned Lover Boy" respectively). For this mimed performance May is seen playing a grand piano as well as his guitar and, on the recording, he plays both piano and synths in addition to acoustic and electric guitars. May also sang lead vocals for the harmonized line "this time and evermore" throughout the song. At one point Mercury is seen miming incorrect words.

During the Freddie Mercury Tribute Concert at Wembley Stadium in 1992, this was the third song of the second half, performed by Zucchero and Queen. In Queen + Paul Rodgers Rock The Cosmos-tour 2008 it was played in the Spanish speaking countries, sung by May.

This song also made it onto 1999 Queen's Greatest Hits III.

Musical theatre actress Elaine Paige recorded the song on her album of Queen covers The Queen Album in 1988.

The baby's face image of the single's cover would reappear on The Cross single for their song "New Dark Ages".

Posted by Unknown at 2:14 PM No comments: