Queen A Day At The Races Album Review

Queen A Day At The Races Album Review

Tie Your Mother Down kicks the album off. Not a big hit in the charts but still a firm favourite with Queen fans

You Take My Breath Away follows a typical piano ballad by Freddie Mercury which only he could do.

The Millionaire Waltz about John Reid is quite brilliant with lots of twists and turns and some very good guitar work by Brian.

You and I which was a b side to Tie Your Mother Down was John Deacons Song which gives a nice feel to the album.

Side two begins with the biggest hit from the album Somebody To Love which reached number two in the U.K. charts stopped only by Shawaddywaddy

White Man follows which is a song about native Indians

Posted by James Rundle at 3:03 PM No comments:

Email ThisBlogThis!Share to TwitterShare to FacebookShare to Pinterest
Labels: Queen A Day At The Races Album Review, queen band


Bohemian Rhapsody Movie Trailer #2 Reaction
The new trailer for the Bohemian Rhapsody Movie was released today with lots of new footage to give us clues as to what’s in the film
The Live Aid scenes look quite amazing we see Brian May And John Deacon with cello bowes on their guitars possibly playing Death OnTwo Legs. The band with Kazoos as they must be recording Seaside Rendezvous as well as experimenting with speakers.
We see Mike Myers as Norman Sheffield who looks the villain
One possible discrepancy is Brian May explaining We Will Rock You to a short haired Freddie Mercury with moustache which doesn’t fit the time line
There’s also a line at end where Freddie questions how much time he has. Read into that what you will

Posted by James Rundle at 4:16 PM No comments:

Queen A Night At The Opera Album Review

Posted by James Rundle at 3:01 AM No comments:

Email ThisBlogThis!Share to TwitterShare to FacebookShare to Pinterest
Labels: a night at the opera, Album Review, queen


Queen - Sheer Heart Attack Album Review
Queens 3rd album released 8th November 1974. Which meany in a Year Queen had released 3 albums.
If Queen II had created a mythical sound scape the Sheet]r Heart Attack delivers another aspect. That of personality humour and musical diversity.
Th First track Brighton Rock starts with fair ground noises and someone whistles I Do Like To Be Beside The Seaside which links it to the end of Queen II with Seven Seas Of Rhye Ending. The Brian May guitar solo is nothing short of epic and is still played live today.
Killer queen gave them a No2 Hit in uk charts and a spot on Top Of The Pops
Tenement Funster one of Roger Taylor’s finest Queen songs to date.
Flick Of The Wrist was a double A Side with Killer Queen but never for the deserved attention.
Lily of the Valley a short but lovely little ballad
Now I’m Here gave Queen another hit with this rocker which saw Brian May record the guitsr while I’ll in hospital.
Side two kicks off the In The Lap Of athe Gods not to be mixed up with the Revisited Version at end of album.
Stone Cold Crazy is a fire cracker of a song actually covered by the mighty Metallica in the 90s.
Dear Friends is a beautiful but sad little tune before going into Misfire which was John Deacons first Queen song
Bring Back Leroy Brown a humourus vaudeville song featuring George Formby Ukulele Banjo
She Makes Me (Stormtrooper In Stilettos) a Brian May song with heavy breathing and police sirens at the end.
Finishes off with In The Lap Of The God’s Revisited And Try Classic which should have been a single and played live throughout Queens live shows
Brilliant album and one of Queens finest

Brighton Rock being played at The London Olympics

Posted by James Rundle at 9:22 AM No comments:

The album is divided into a white side and a black side. The first side is made up of Procession a Brian May instrumental multi guitar track which is quite regal and Elizabethan sets the mood of the Album.

Father and Son follows running into White Queen As It Began Another Brian May written track inspired by Robert Graves mythological book The White Godess.

Some Day One Day is an acoustic track sang by Brian May and features the hairfred guitar with chiselled bridge to give a sitar sound. Loser In The End is the only Roger Taylor track on the album.

The black side kicks off with Ogre Battle a Freddie Mercury written track which is a for runner to thrash and speed metal. Probably Queens heaviest ever song.

Nevermore is a beautiful short piano ballad by Freddie before merging into March Of The Black Queen in my opinion the best track on the album and most complex of arrangements.

Last but not least in Seven Seas Of Rhye which was Queens first hit.

See What A Fool I’ve Been was a B- Side which didn’t feature on the album but was later included on the bonus disc.

http://www.queenzone.com/favorite-Queen-album.aspx
Posted by James Rundle at 3:54 PM No comments:

Queen We Are The Champions Acoustic Cover Guitar Tab 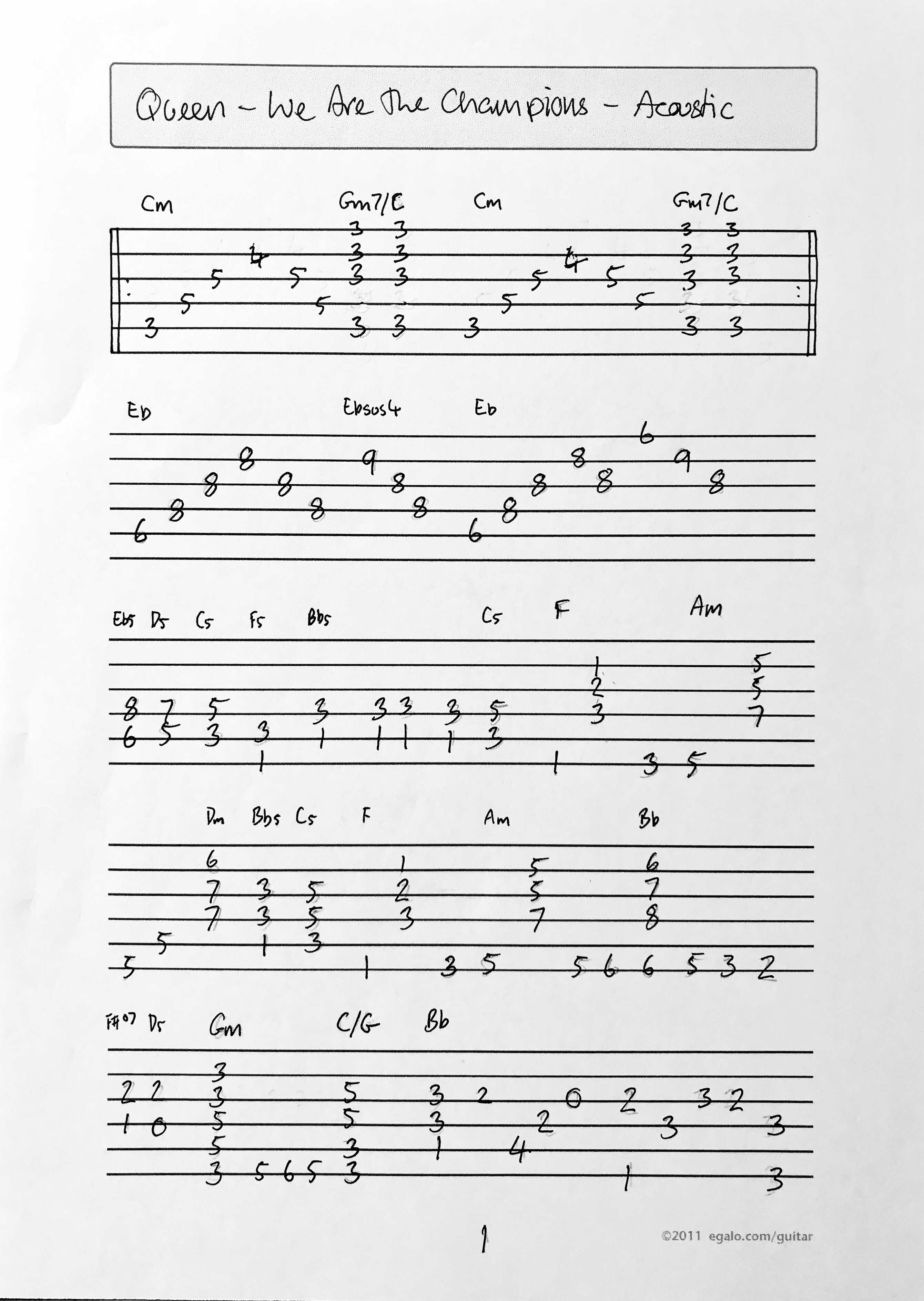 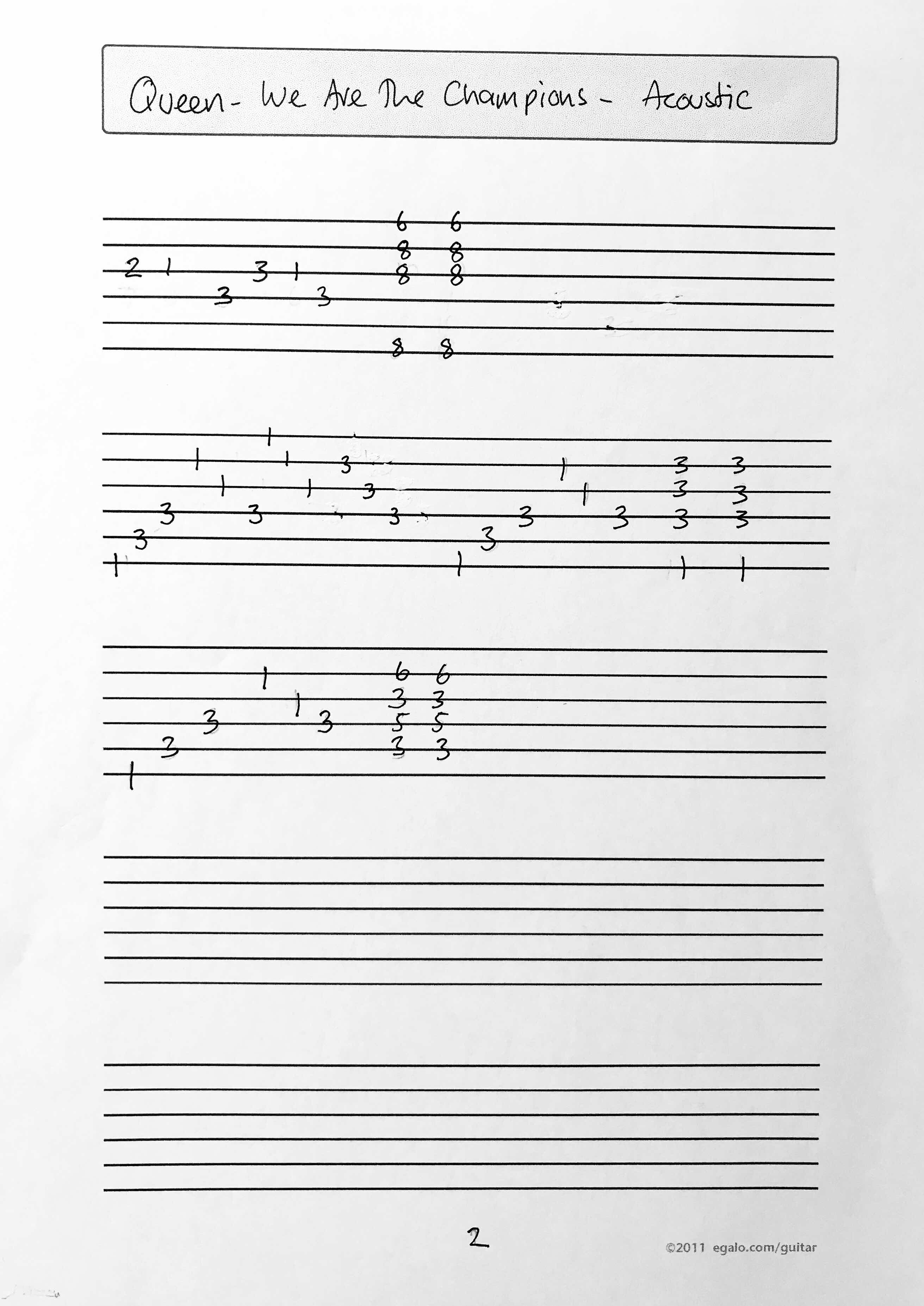 Posted by James Rundle at 5:04 AM No comments:

Email ThisBlogThis!Share to TwitterShare to FacebookShare to Pinterest
Labels: guitar tab, queen, we are the champions

The recording of the album was plagued with problems. Recorded during down time and having to re record many of the tracks at the request of producer Roy Thomas Baker.

High points of the album are definitely Keep Yourself Alive which failed to chart due to no air play on radio. Also Liar and Great King Rat.

Other songs on the album are My Fairy King, The Night Comes Down, Jesus, Modern Times Rock N Roll, Son And Daughter as well as a short instrumental track Seven Seas Of Rhye which appeared I full on Queen II the following year.

Other songs of the time which didn’t appear on he album were Polar Bear, Silver Salmon And Hangman which is rumoured to have a studio recording. Mad The Swine whichnwas meant to be the fourth track on the album was left off due to lack of quality with the percussion. This song didn’t appear until 1991 as a B Side on the 12 inch version of Headlong

Posted by James Rundle at 4:49 AM No comments: 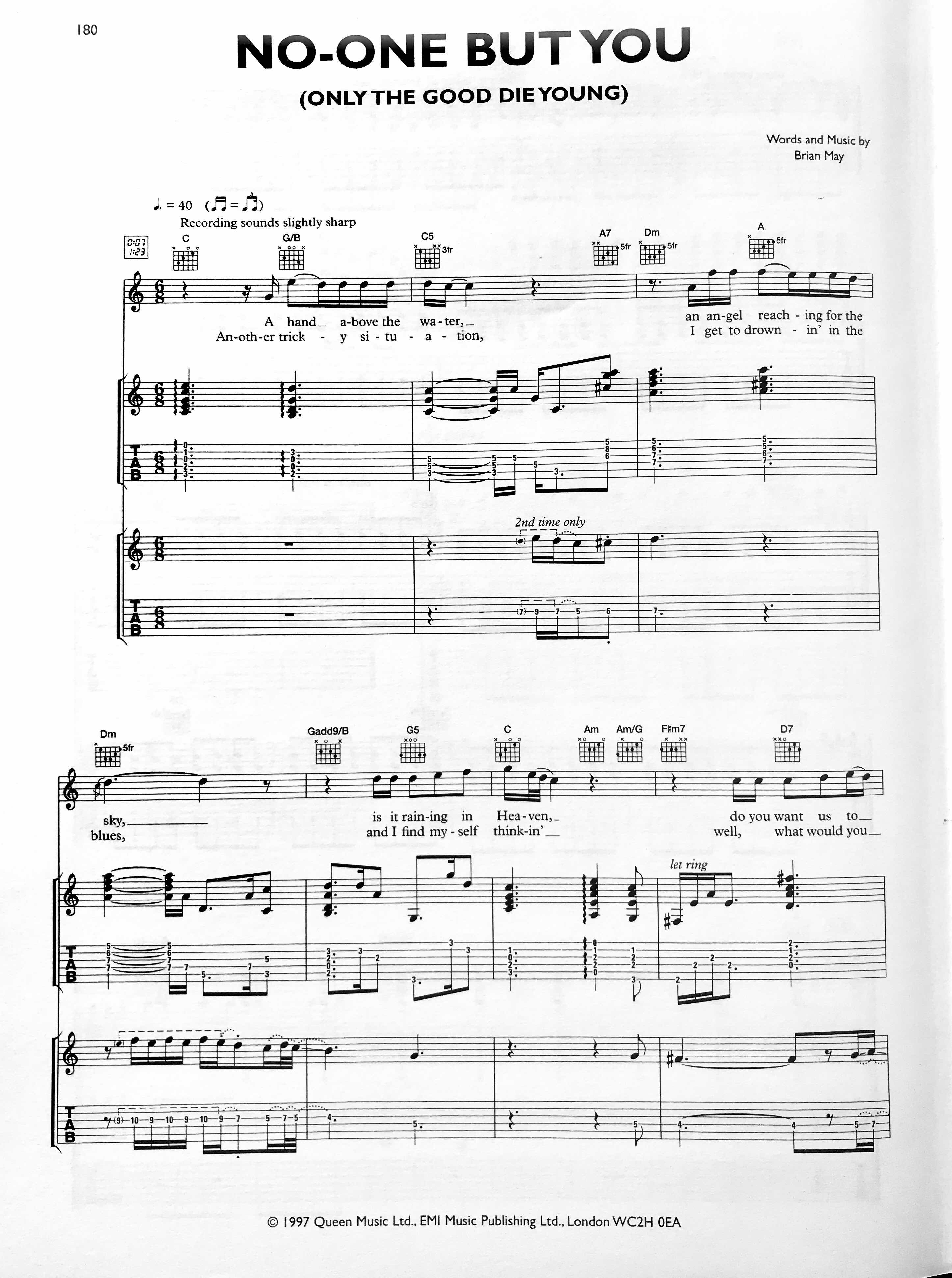 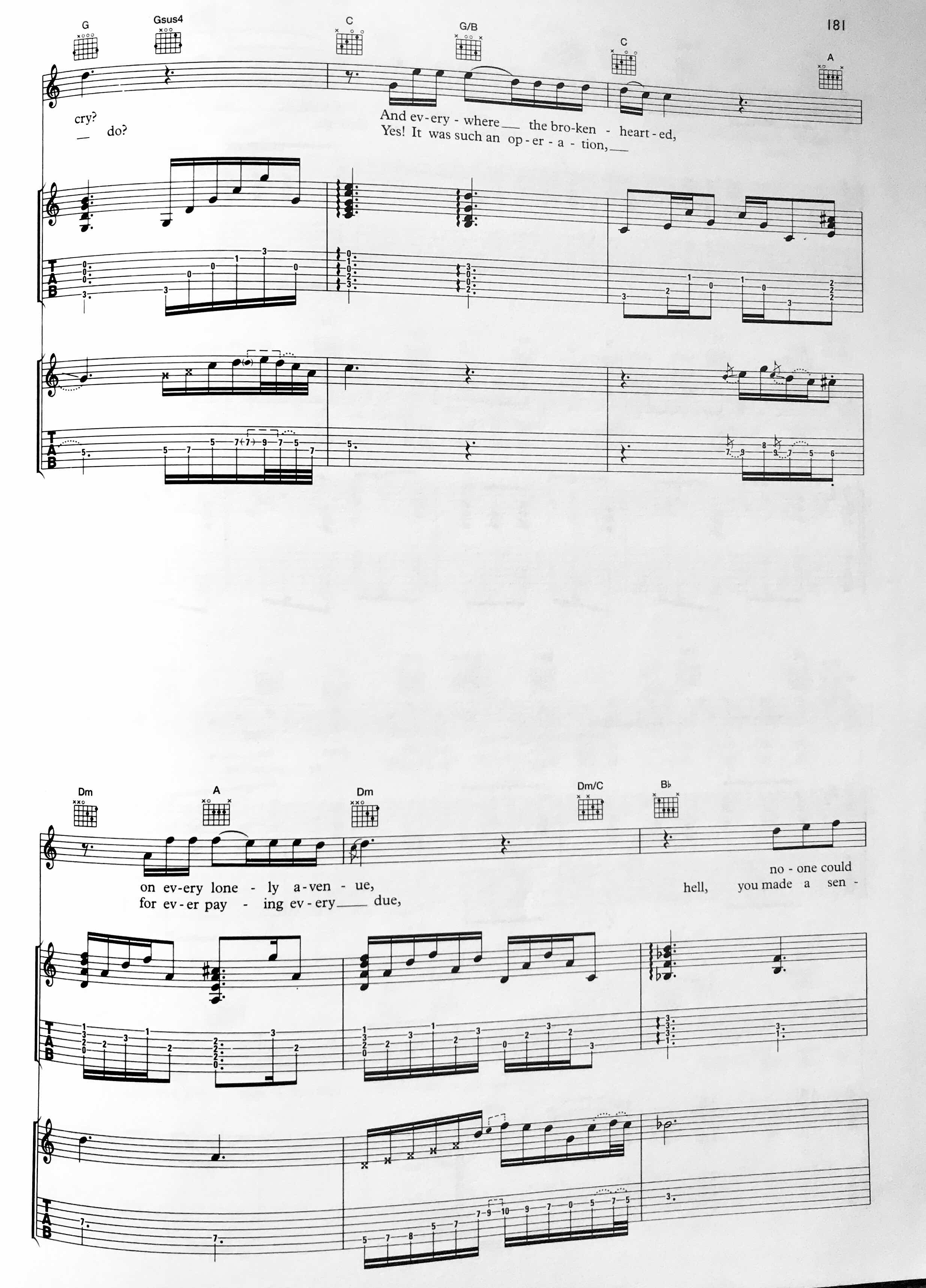 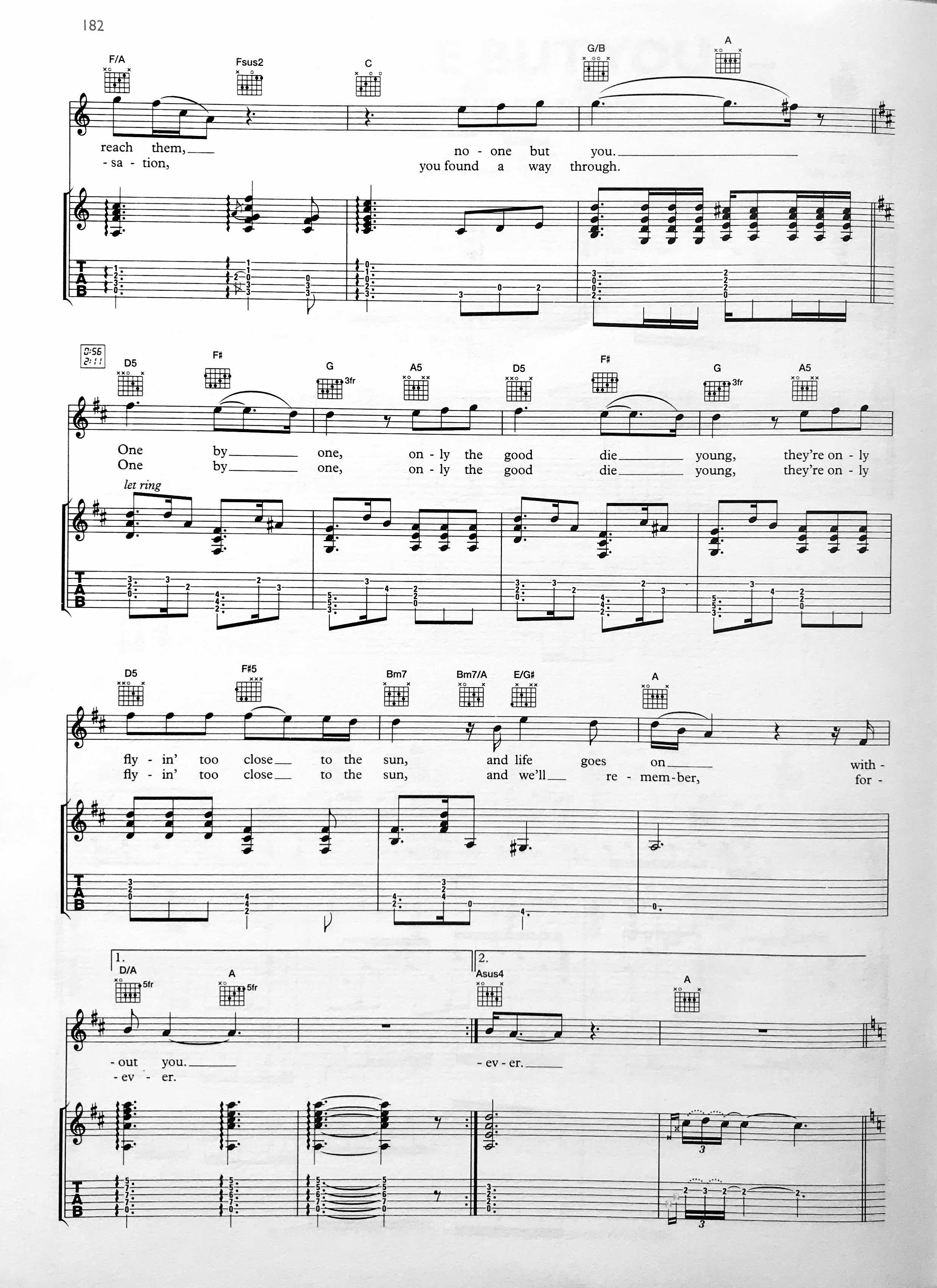 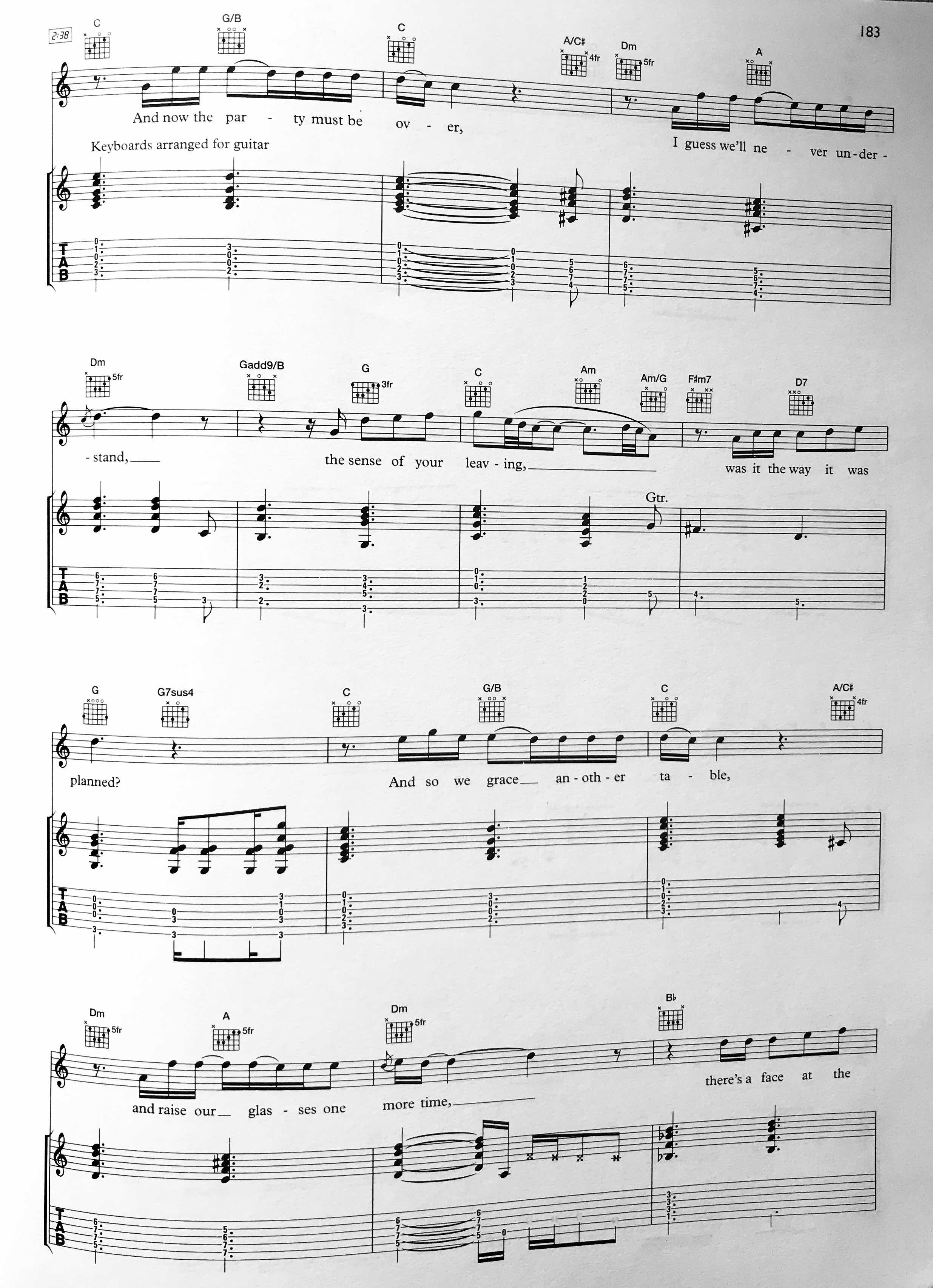 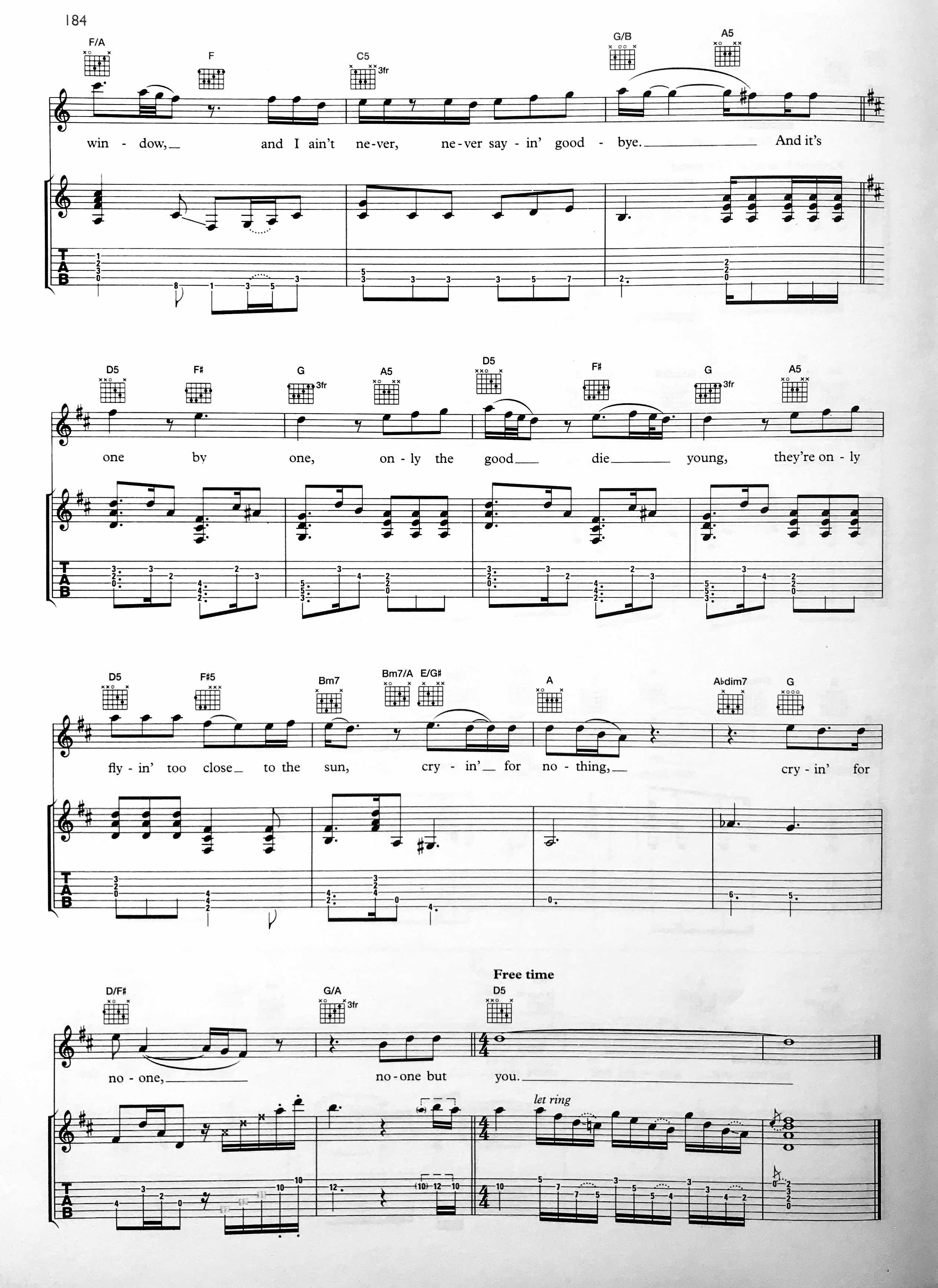 Posted by James Rundle at 2:28 AM No comments:

Queen Made In Heaven Guitar Tab 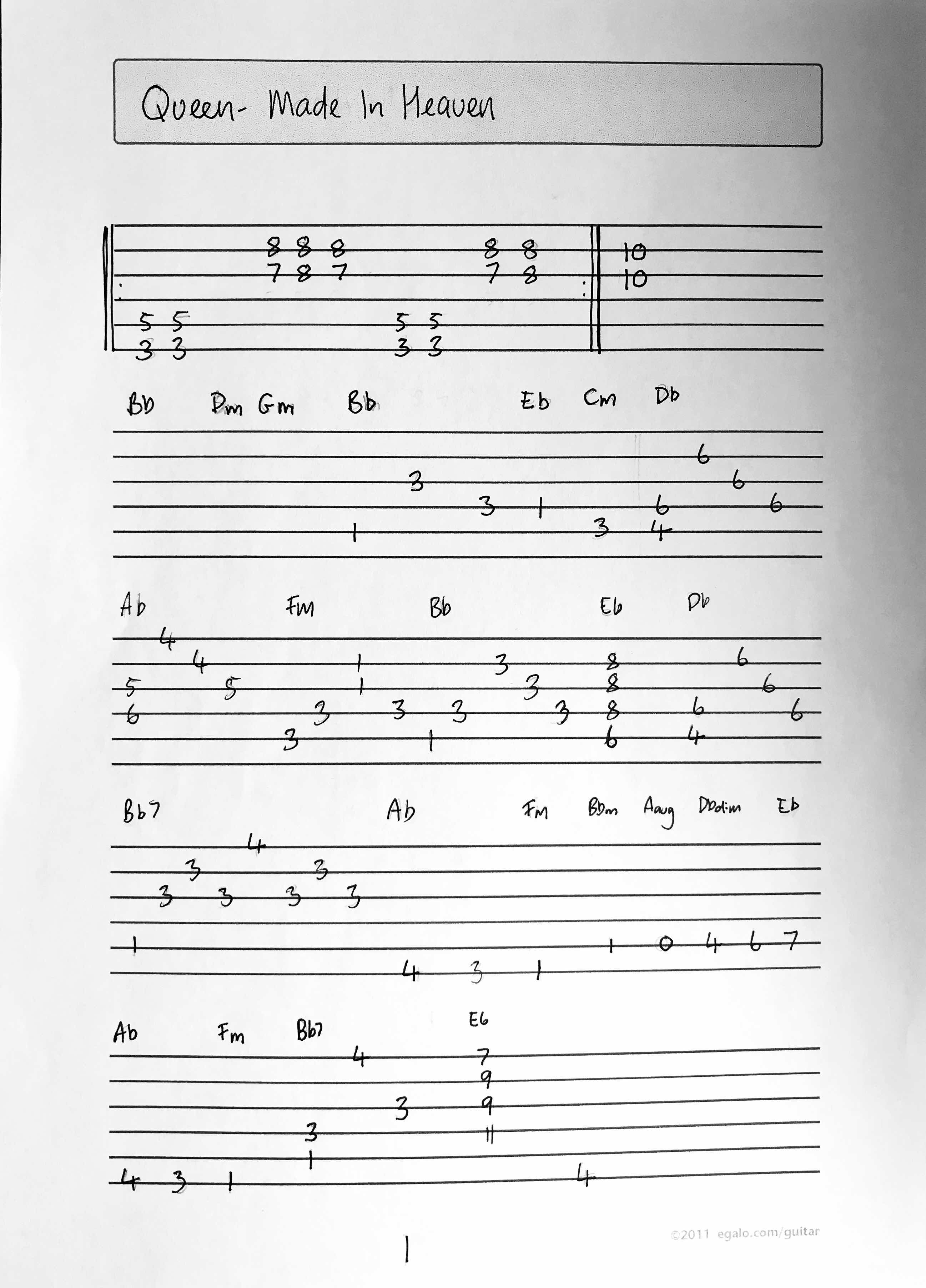 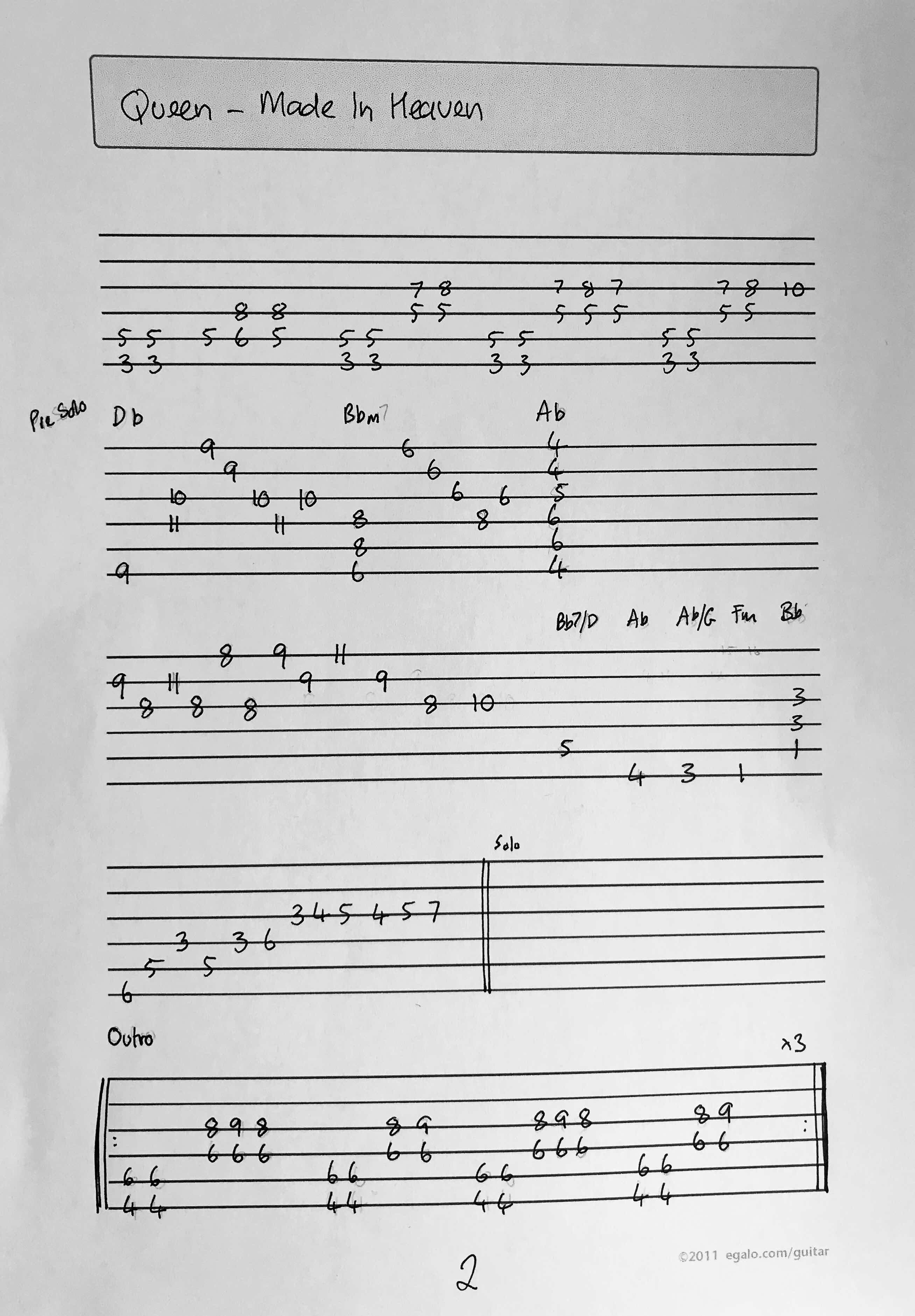 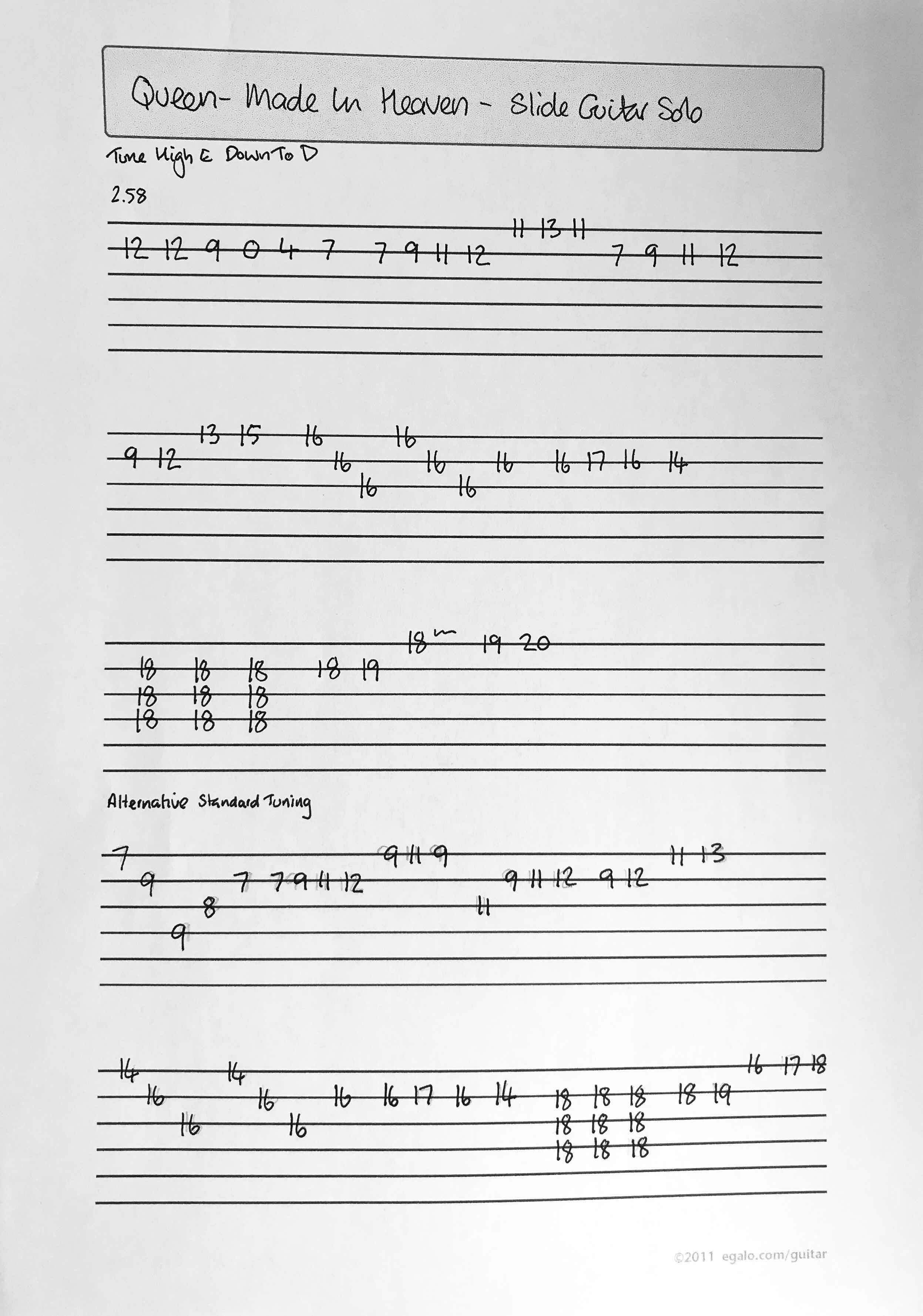 Posted by James Rundle at 8:40 AM No comments:

Email ThisBlogThis!Share to TwitterShare to FacebookShare to Pinterest
Labels: brian may, guitar tab, made in heaven, Queen Guitar 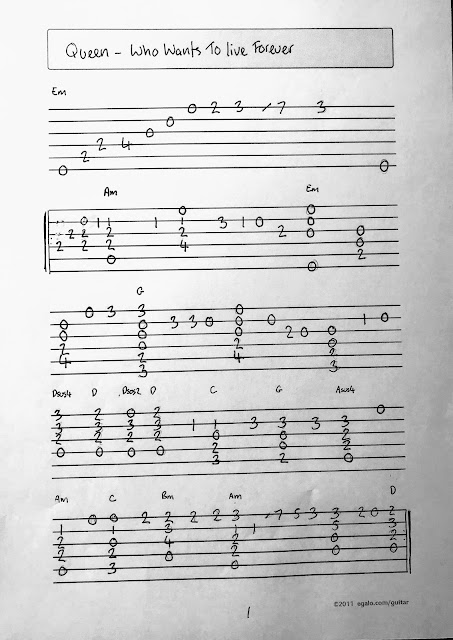 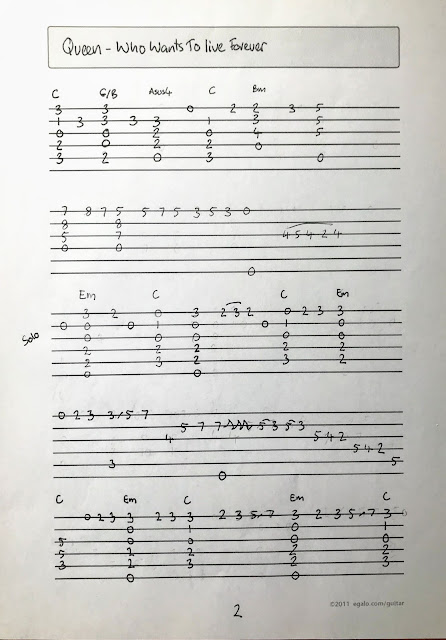 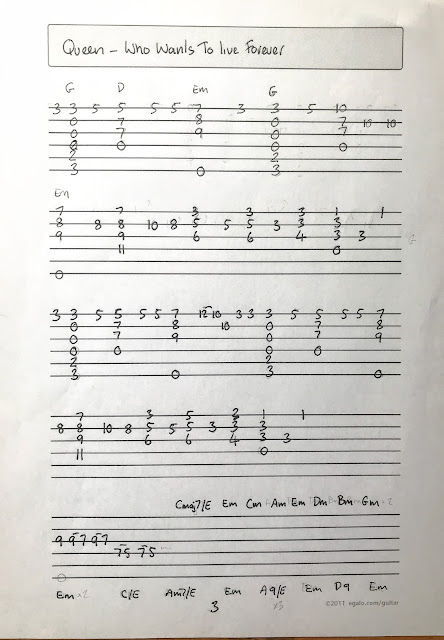 Posted by James Rundle at 8:41 AM No comments:

Queen - Machine (or Back To Humans) Guitar Lesson & Tabs 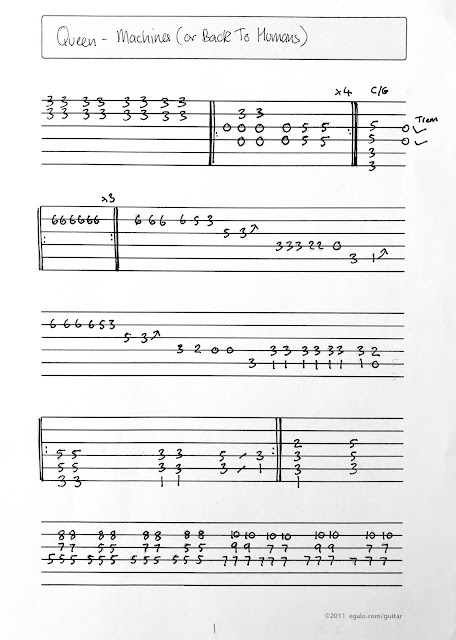 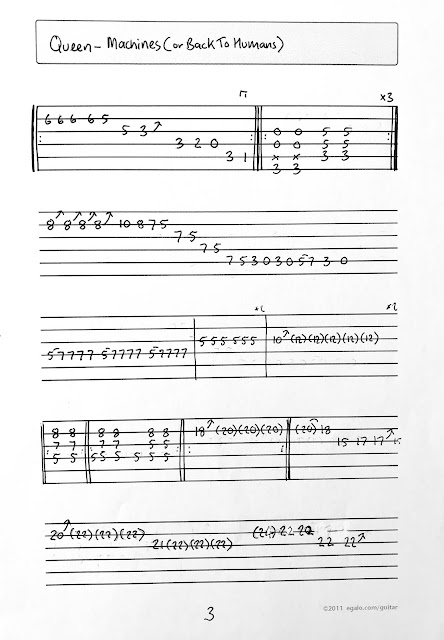 Posted by James Rundle at 1:39 PM No comments: