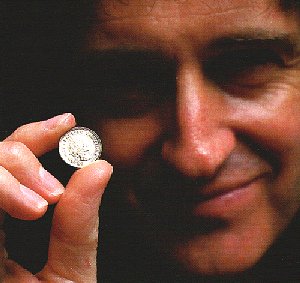 The sixpence (6d; /ˈsometimes known as a tanner or sixpenny bit, was a coin worth one-fortieth of a pound sterling, or six pence. It was first minted in the reign of Edward VI and circulated until 1980. Following decimalisation in 1971 it had a value of  2 1⁄2 new pence. The coin was made from silver from its introduction in 1551 to 1947, and thereafter in cupronickel.
Prior to Decimal Day in 1971 there were 240 pence in one pound sterling. Twelve pence made a shilling, and twenty shillings made a pound. Values less than a pound were usually written in shillings and pence, e.g. 42 old pence ( 17 1⁄2p) would be three shillings and sixpence (3/6), often pronounced "three and six". Values of less than a shilling were simply written in terms of pence, e.g. eight pence