SEVEN Signature Tones that Rocked the World. The Brian May Red Special Pedal lets you bring your own personal creations to life using one of rock's most distinctive guitar tones.
Working closely with Brian May and Eddie Kramer, Senior Production Modeling Consultant (and world-class recording engineer), our Production Modeling™ team delivers the tone that has inspired a generation of guitarists.
The meticulously crafted tones of the Red Special Pedal are modeled with the same gear used in the original recordings.
Design your own unique tones using the Red Special Pedal's models and modes. Tweak the gain, level, bass, treble and control knobs to create your own tone.
We've even included a proprietary guitar knob that re-voices your guitar to sound like Brian's legendary Red Special's Burns™ Tri-Sonic pickups.
All tones are modeled from Brian's Red Special (Burns™* Tri-Sonic™ pickups) with a treble booster and Vox®* AC30 amp unless otherwise noted.
Specifications subject to change. DigiTech, Audio DNA, Red Special and Flexible Output Mode are trademarks of Harman International Industries, Inc. *Other product names modeled in this product are trademarks of their respective companies that do not endorse and are not associated or affiliated with DigiTech or Harman International Industries, Inc. Vox, Foxx, Burns, Tri-Sonic, Ovation, Les Paul and Fender Telecaser are trademarks of other manufacturers and were used merely to identify products whose sounds were reviewed in the creation of this product.
http://www.digitech.com/ 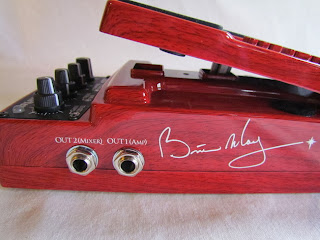